As you may have guessed, we’ve been working super hard on improving The Painter’s Apprentice. We’ve demo-ed at some great places such as GaymerX East and we’re headed for our second year at MAGFest. Even more exciting, we were selected to show off the game at PAX South at the PAX Rising booth! How cool is that?

Since our last development blog, we’ve gone through a lot of changes. We’re releasing first on PC (hurray!) so we’ve been tweaking the controls to fit the keyboard and mouse as well as the controller. You can actually download the demo we show off at these conventions to try it out yourself at home. And if you like it, vote for us on Steam Greenlight.

So what’s changed since the last time? We’ve added an amazing parallax effect that you can see a gif of here:

We also added in some platforms that now don’t just move in a linear line but can go around in a box.

We’ve also updated the animation for the little blob so it stands out more. Here’s what it looks like now:

We’ve also cleaned up a couple items on the backend that makes the game run much smoother. You might not see it, but there’s a whole lot that goes on behind the scenes.

We’ll be updating this blog more often as things heat up. Of course feel free to follow us on Twitter and Facebook. And don’t forget to sign up for our newsletter as you’ll be the first to get access to our builds and learn about some cool news. 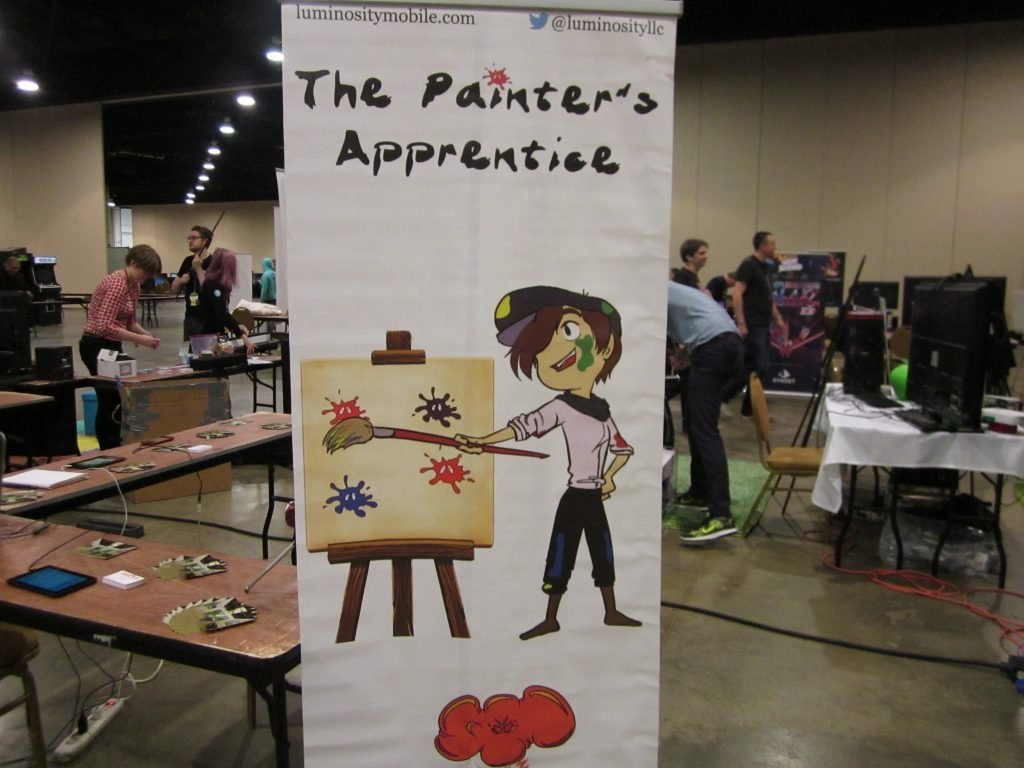 Phew, it feels like forever since we’ve posted an update. It’s taken us a while to get situated again after the four-day weekend that was MAGfest, but now that we’re finally back in the groove of things we wanted to write up an article on our experience there and what went right and wrong.

If you’re unfamiliar with it, MAGFest is a four day music and gaming festival held in National Harbor, Maryland. The main features are the amazing musicians who literally fly from around the world to play their video game music. The gaming section of it comes in the form of arcade games, board games and indie games. The Painter’s Apprentice was accepted to take part in the MIVS (MagFest Indie Video Game Showcase). We were one of 55 other indie developers chosen to exhibit at the festival, which was super exciting especially since there were thousands of people who attend MAGFest. If you’re an indie developer I highly suggest submitting here. Not only is it FREE to submit but also FREE to exhibit. All you need to worry about are travel expenses and promotional materials. 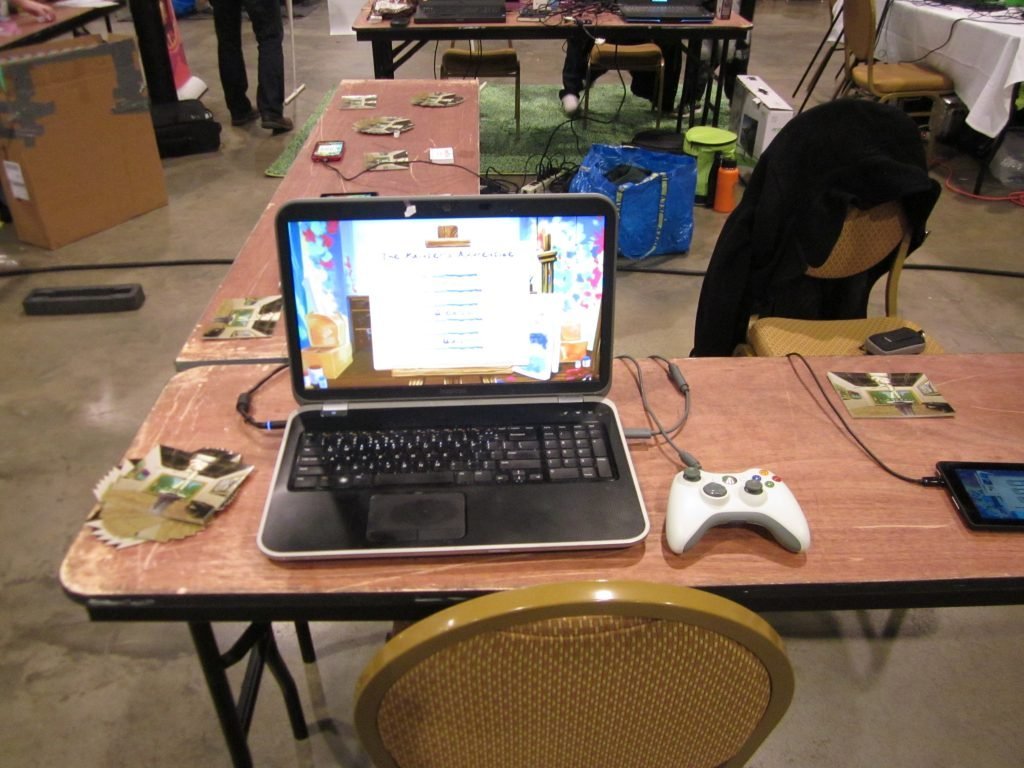 Every developer was given a 10 x 10 space, two tables, two tablecloths and two chairs. After that, it was up to us to decorate and arrange our booth to attract people. We also worked with a Yogibo representative and were able to get two of their bean bag chairs and holder for one of our tablets. I’d say that definitely helped draw a crowd as people were drawn to the comfort of the bean bag. Plus they were kind enough to let us developers use their products for free so long as we had their flyers at our table. It’s a pretty good tradeoff.

There were some pretty amazing setups for the booth and if we were to go again next year, we’d definitely rent a car so we could bring some more items like a projector and screen, a rug, some large screens playing some gameplay videos of the game and some more devices. I think we could have attracted far more people with videos of the gameplay as most people had no idea what kind of game to expect. Once I told them it was a platformer they were much more interested in trying it out. Our banner (printed by Vistaprint) did attract several people so I’m glad I invested the money in it early on.

For the first two days I had a PC which was a huge crowd draw. People would just stand and watch others play so at one point I had a nice little ground set up around the booth. Then my computer died. Needless to say I freaked out. I don’t know if there was anything I could do to have prepared for that. Carrying two laptops would be ideal but I just didn’t have the space (or money). Still, I had my mobile devices and managed to make it through the rest of the festival with those. I have to say though I saw a sharp decline in players once the PC was gone.

My devices included a PC (for two days), a Kindle Fire HDX, LG smartphone and Kindle Fire 7″. If you have an Android game, consider getting a Kindle Fire 7″. It’s $49.99 normally. I was lucky it was on sale for $39.99 and I got and additional $10 off thanks to a one-time deal for signing up for Amazon Now. It doesn’t have the best screen, but it managed to play my game without a hitch. 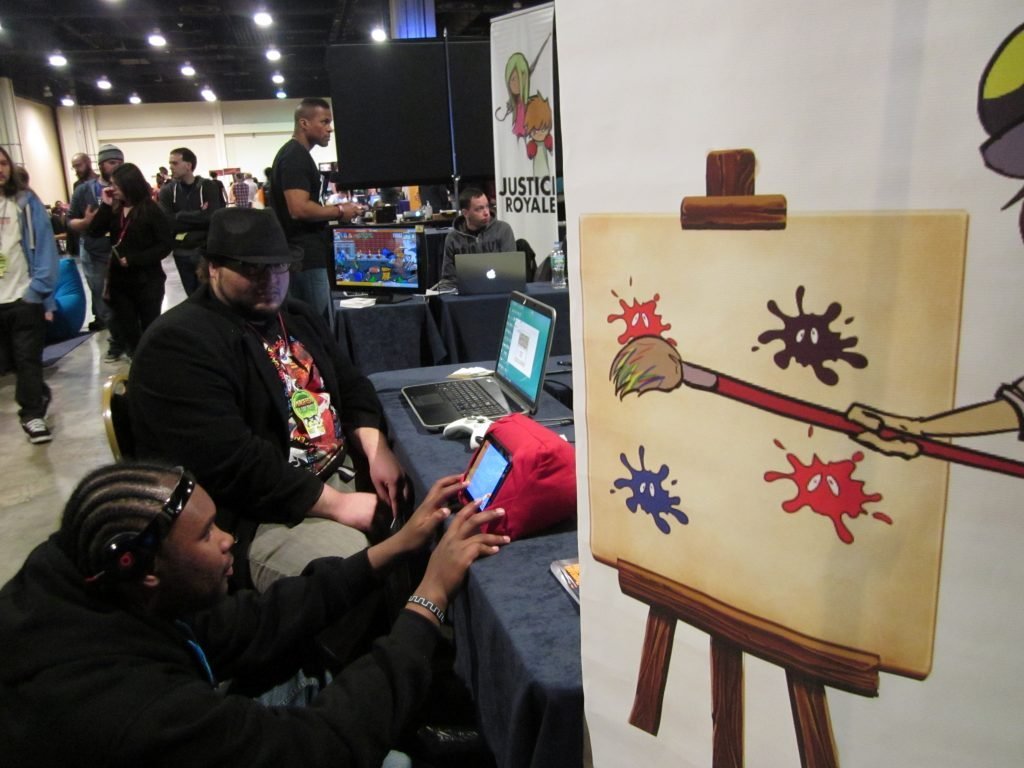 As someone who worked as a canvasser for almost a year and a bartender for over 5, it has almost become second nature to me to simply call people over to the booth once I established eye contact. This was especially critical for our booth if there was no one there as passersby couldn’t see what the game was all about. Once we had a few people playing on the devices others gravitated to check it out. If all the devices were being used I would hand them a postcard with our information on it.

I’d have to say canvassing people to play my game at a gaming convention is way easier than getting people to fork over their credit cards to donate to Greenpeace. After all, I already know they have an interest in gaming so I don’t really need to come up with crazy lines to get them to stop. There are some tried and true techniques though:

While I didn’t track exactly how many people I had stop by my booth I would say it was anywhere between 300-400 over the four days.

At any event you want to have something to give to visitors so they remember your game. I had big plans to have some buttons people could take, but unfortunately I ended up ordering them too late and wasn’t able to get them to MAGFest. With that said, I’d still recommend working with Pure Buttons. It was fairly cheap and the quality was very good. They’re also very responsive and helpful through email. Next time I’ll make sure I order all promo materials at least a month before the event. Luckily, I did have around 200 postcards and business (Vistaprint) from previous expos I had already attended so I didn’t really spend much money at all on swag. By the time Sunday came around all my postcards were gone. Luckily, Sunday was only two hours so I ended up handing out my business card instead. I would love to have more stuff to hand out and I think next time I’ll wear a Painter’s Apprentice shirt.

There are a lot of reasons to exhibit at these conventions, but the biggest one for most developers is to build a community and generate some leads. For me, I really wanted to expand my mailing list. My method might be a bit tricky – I collected emails by saying they were signing up for Alpha testing. While this is true, they’re also going on my mailing list. I had a simple notebook and pen for sign ups, which I’ve found work very well for me. Other developers prefer digital sign-up. It all depends. I was able to collect quite a bit of emails and have increased my subscriber list by 100%! 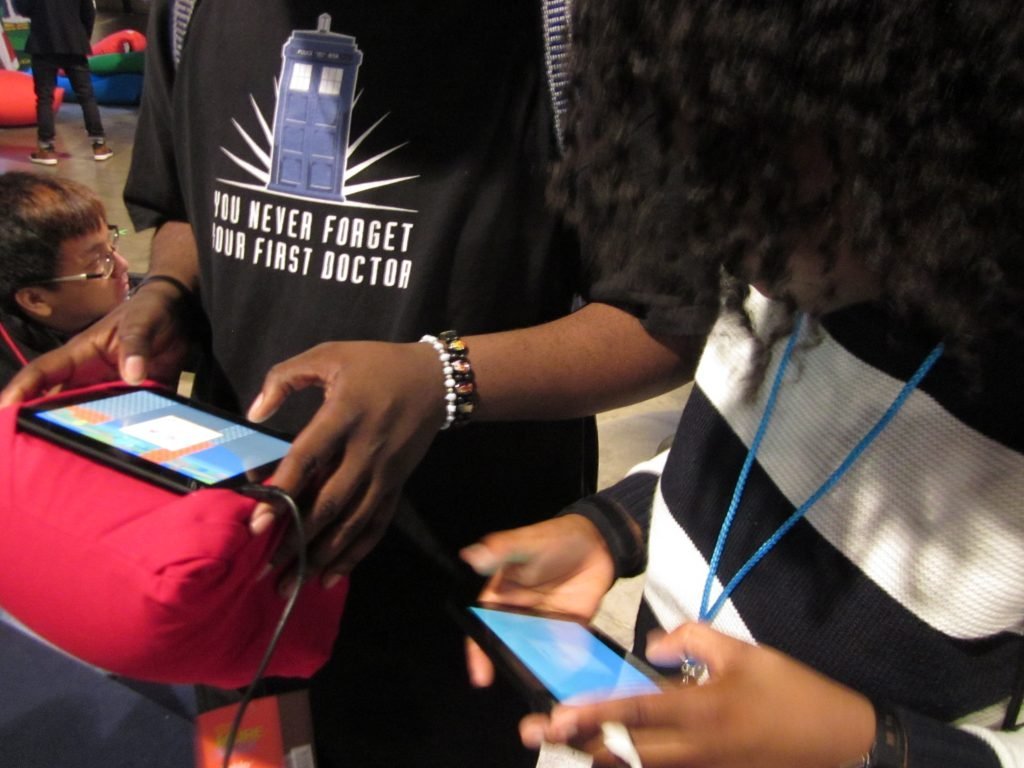 Besides getting emails, the other great thing about these conventions is the free playtesting! There are literally hundreds of people who played our game, which ended up uncovering several new bugs and inspired some added features to the animation, sound and even gameplay. It was also pretty awesome seeing people honestly enjoy the game. I had one person who played through all of the available levels and another one who was super excited about the collectibles and star system. It justifies all of the time and effort we all spent on the game and really hits home that people will like it.

I ended up not staying at the Gaylord Convention Center simply because it was just too expensive. For the first two days I stayed at a motel in Alexandria, which is only about 5 miles away from the convention center. Of course that mean I needed to use a car service, but Uber and Lyft both cost around $10 one way. Since my hotel was only $74/night that saved me a good $70. Luckily for me, I was able to spend Friday and Saturday at my sister’s place for further savings. Of course, even if I stayed at the motel for the other two days it would have only costed me $288 for the trip.

As for travel, I took the Greyhound down which was surprisingly cheap. At the end of the day my costs were fairly low.

In general, I loved being a part of MIVS and had a blast meeting other game developers, gamers and even some press. It also taught me quite a bit about how to set up a booth and what exactly I need to catch people’s attention. Next time I go to another large event like this, I know exactly what I’ll bring. You can see a video of our booth in action below!