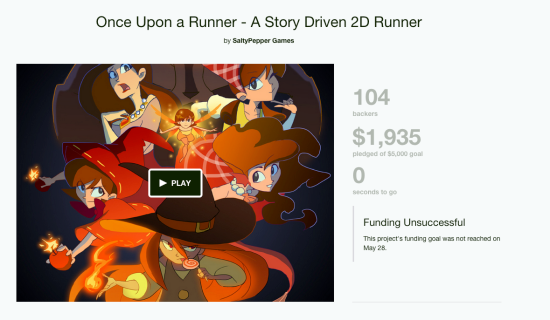 For many people that have followed us back when we were SaltyPepper Games, you might remember our Kickstarter campaign to raise $5,000 for Once Upon a Runner. The objective was to help recoup some of the payments we had made out to artists and, of course, to drum up a little bit of interest in Once Upon a Runner before its release. We were certain we could reach our modest goal. After all, there were plenty of other games that collected ten times the amount. For those that don’t know, we didn’t reach our goal though we were still able to release on Android and, just recently, on iOS. So what went wrong? Why couldn’t we raise $5,000 on Kickstarter?

I read plenty of articles on how to run a successful Kickstarter and the tip that always made the list is to start marketing early. In my mind I thought I had. A month before we actually launched our campaign I had created the press release, written up the content for our page, started handing out some brochures and increasing our activity and engagement on social profiles. The problem is, a month is just not enough time to grab someone’s interest and build up a fan base. Everything was kind of rushed, especially when contacting media outlets to get some coverage on the campaign. While we still did get a handful of articles it certainly wasn’t enough to really get people interested in our game or company for that matter. As well, our social media efforts were also futile. Without a group of loyal followers there was no way our campaign would get the social media boost others might enjoy.

So what should you do? Start as early as possible and really engrain yourself into these communities. It’s really never too early to start marketing. Yes, even if you do not have a product yet jump into a couple groups and start contributing. Engage in conversations with other group members and be as helpful as possible. The more you interact the more people will check out your campaigns/links when you do post them. After all, you’ve already built up a strong relationship and hopefully gotten them excited about your game during the development process. It can take a long time to build up this rapport but once you do you’ll have a group of people who will help spread the work about your Kickstarter and game to their friends.

As much as I don’t want to admit it, the truth is we didn’t plan out our Kickstarter as well as we could have. We didn’t have specific milestones for each day nor did we really have any idea what to put up for our updates. Not only that but our campaign ended around a holiday, not the best time to make that final fundraising push. Our video was also a bit all over the place in terms of graphics, our message and sound quality as well. We definitely should have spent much more time with the recording to present something that would really excite viewers and make them want to contribute. As well, we also should have spread out the news coverage over time to have a more consistent flow of traffic and backers.

If you want your Kickstarter to be successful you need a plan of action. Write out a script for your video and rehearse it until you don’t make any mistakes. Have several people provide feedback on the video and its message. Are you actually conveying a sense of urgency and telling viewers why they should back your project? You should also plan your updates in advance. Maybe not all of them, but you should have a basic idea of what to post to keep your backers involved and attract new ones. This could be as simple as showing off concept artwork, posting a dev log or even offering a special “gift” when you reach $x. The more you have planned out the less you need to scramble to come up with ideas.

Although we did have some gameplay videos, the most successful game Kickstarters also used gifs creatively whether they were short loops of gameplay or animated sprites of their in-game characters. It might seem unnecessary, but these visuals do a great job engaging visitors because it gives them an idea of how the game will play and what it looks like. The more high quality images, gifs and videos you can provide the better. This includes adding images of your rewards in the body of your campaign, using sprites/gifs instead of text for your different campaign sections (About us, Description of game, etc) and posting pictures of your team members. Put up as much of the game as you can in your Kickstarter so people know exactly what to expect. The better you make it look, the more likely they are to back.

Just because we failed doesn’t mean we won’t try again. Many Kickstarter creators have failed at least once before finding success. The trick is to learn from past mistakes and apply those lessons to the next campaign. The next time we find ourselves on Kickstarter we have no doubt that we’ll be able to raise the funds. But before then we’ll make sure we have all our ducks in a row.

Have you any of you failed on your Kickstarter? What did you learn? Tell us in the comments below.